The game of Pickleball has increased in popularity since its conception in the 1960s by Joel Pritchard and his friends.

Today, people all over America and Canada play the game. It is steadily gaining popularity in other parts of the world, so it’s a great idea to learn more about it no matter where you are. I have compiled this guide specifically for the amateurs who would like to know everything about Pickleball.

I will take you through the history of the sport and technical details paramount to the game. Pickleball is closely linked to badminton, ping-pong, and tennis, and this might create confusion for many people. However, after reading this guide, you should have a thorough overview of the game of Pickleball.

Pickleball is an American paddle sport that basically resembles tennis but differs in—among other aspects of play—paddle designs, court dimensions, and rules.

The game combines various elements of ping-pong, tennis, and badminton. The founding idea of the game was for people to have lots of fun, and it can be played by many people at once. How many depends on court dimensions. If need be, a large court (perhaps a tennis court) can be partitioned into smaller Pickleball courts as per the dimensions that I highlight later in the guide.

Since the game’s successful promotion, numerous tournaments have been held. Participants can play as doubles or singles. The game’s net dimensions make it easy for families to have fun together on the court.

Pickleball is a versatile game that can be played indoors or outdoors. Each environment has its pros and cons. For instance, indoor play avoids the outdoors’ fluctuating temperatures, but it can be noisy. An outdoor environment is great when sunlight and warmth abound, but you’re exposed to any inclement climate and seasonal conditions.

Why is it called Pickleball?

The name “Pickleball” didn’t immediately click in anyone’s mind after the idea of the sport itself. The name came later on after the game’s promotion had gained momentum. However, the origin of that name is not that clear. According to the founder’s wife, Joan, she started calling the game “Pickleball” because it combined the elements of different sports, as mentioned above.

On the other hand, Barney McCallum (Pritchard’s friend) stated that the game was named after Joel’s dog Pickles because the dog used to chase the plastic ball and run with it. The two statements coincided, but the matter has never been cleared up.

The game was invented by Mr. Joel Pritchard, a former U.S. Representative and Washington Lieutenant Governor, and Bill Bell in the summer of 1965. Mr. Pritchard had just helped his fellow Republican Daniel J. Evans prior to the emergence of the game in 1965. Along with his friends, they advanced the game.

On the 13th of February 1968, Mr. Pritchard and his friends had compiled documents to incorporate Pickle Ball Inc.; the effort that was meant to promote the game in the United States. They subsequently set the rules and designed the paddles following their invention of the game in 1965.

Bill Bell, co-inventor and the brother of Nancy Bell Evans, and Barney McCallum were the first to show confidence in the evolution of the new game.

Mr. Joel Pritchard and Bill Bell invented the game, but credit has been given to Mr. Joel as the pioneer of Pickleball. He passed away at the age of 72 in 1997, and his legacy recognizes him not only known as Washington’s Lieutenant governor but the father of Pickleball.

It was on a Saturday when Mr. Joel Pritchard and Mr. Bill Bell derived the concept of Pickleball from an improvised game put together for family. They were coming from a golf game when they noticed that their families needed some form of an entertainment. There was only a badminton court with no racket set, so they devised a strategy to play with a perforated plastic ball using ping-pong paddles. A week later, the Pritchard’s introduced Mr. Barney McCallum to the game when he visited Pritchard’s home.

Efforts were put in place to formalize the game and set its rules. Pickleball-specific paddles and courts were then designed. Initially, they agreed on the net’s height at 60 inches, but that height was later reduced to the now popular 36 inches. The intention was to make the game convenient for all ages, including young ones who would be able to volley the ball with ease over the lower net.

In the 1970s, a corporation was created to promote and protect the formation of the new game. The first Pickleball tournament was held in 1976 at the South Center Athletic Club in Washington. Tennis players were among the participants, but they did not immediately understand the game because of the different techniques that were required.

The 1980s gave birth to the USAPA, which was created to promote the game nationally. Pickleball rules were officially drafted and published in 1984. Since the formation of this organization, there have been different executive directors at the helm. Mr. Arlen Paranto, a Boeing Industrial Engineer, was the first to manufacture the composite paddle for this game. The wood paddle was predominantly used initially. Today, there are different paddles, including include graphite and aluminum materials.

As stated on the Pickleball Stuff website, over 39 recognized places in North America cherish the game. Some European and Asian countries are coming on-board to advance the Pickleball game because it is a social game characterized by fun.

If you want to know more details of pickleball history you can check here.

You don’t need much to play Pickleball. Basic equipment includes a paddle, a perforated ball (between 26 and 40 small perforations), and a pickleball net. There are different paddle designs and materials. And the balls vary greatly in color. However, only choose what is endorsed by the International Federation of Pickleball.

If you don’t know which Pickleball paddle you need, to be top of the game, then you should definitely check the paddle guide we listed below-

Also important are Pickleball shoes and a carrying pickleball bag for your valuables.  Manufacturers make shoes for women and men specifically designed for this sport. Pickleball is a demanding sport, and it demands a lot even from a simple pair of shoes.

For instance, your shoes should give you enough support so that you do not twist your ankles while playing. They should also have good traction. Avoid running shoes or anything else that wasn’t specifically made for Pickleball. As for other apparel, they should be comfortable and made with elasticized material that enables you to maneuver well. Ladies might opt for elasticized leggings, and men can opt for shorts.

Initially, the net size was 60 inches high. It was subsequently reduced to 36 inches, which is the standard size used today. Thirty-six inches apply to the sidelines of the net, while only 34 inches apply to unsupported the center of the net. Meshing on Pickleball nets should be small enough to prevent the ball from passing through it. 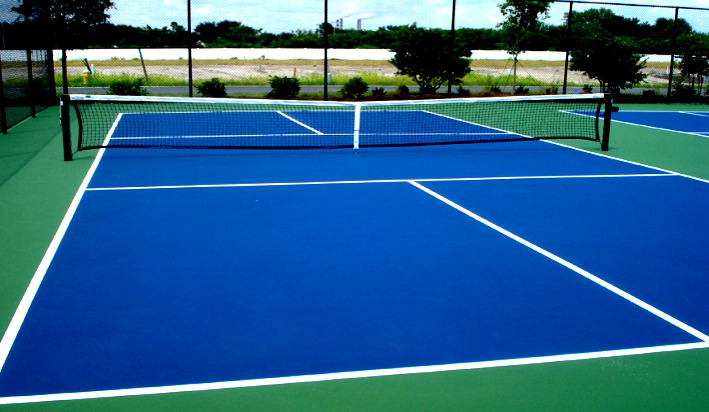 The width of the paddle should be 7-8.75 inches, and the length should 9.5-12 inches. So far, no rule restricts the thickness of the paddle. Check the image below for a visual understanding of the dimensions of the paddle: 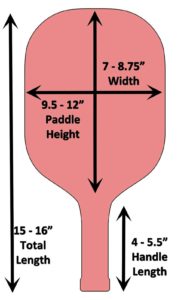 The court is rectangular—the width measures 20 feet (6.1m), and the length measures 44 feet (13.41m). Each of the non-volley lines are 7 feet from the net and 15 feet from the baseline, which runs parallel to the net. The court is divided at the middle (perpendicular to the net), thus making two 10 × 15 foot spaces.

The court dimensions are the same for both singles and doubles. The width is partitioned into two halves, which make it easy for two people to play together. The total playing area is a minimum of 30 feet wide and 60 feet in length. The preferred total area is 64 by 34 feet. Lines, 2 inches thick, frame the perimeter of the court and should be included in the dimension measurements. They should also be uniform in color and contrasts well with the color of the court itself.

Check the image below to get a clear understanding of these dimensions: 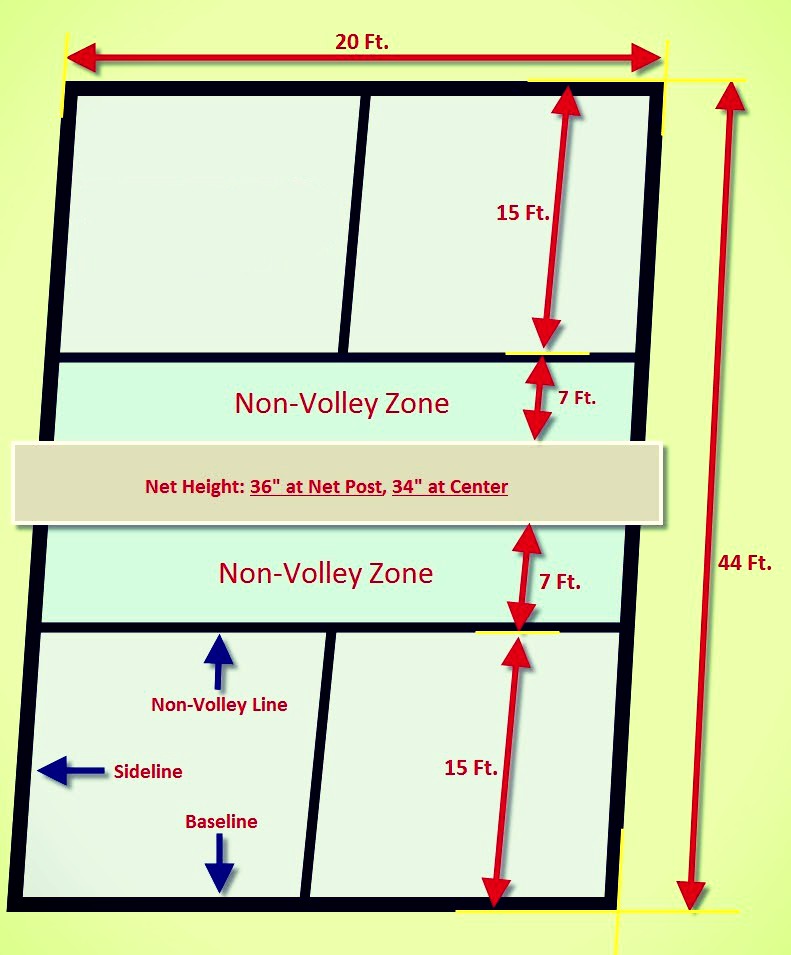 This image also shows the inner dimensions of the court, which include the partitions and the no-volley zone, often called the kitchen.

It can be costly to construct a Pickleball court. The costs ultimately depend on the type of materials used. Common materials include concrete and asphalt. Concrete boasts durability and value while asphalt is more affordable. A court can cost you around $184,000.00 for its entire construction. A person interested in building a court can actually save costs by building the court alone rather than outsourcing the work. Just follow the dimensions as I have described in this article if you’re thinking about laying your own court.

There are numerous lines within the court. These lines include the baselines, sidelines, centerline, and non-volley line. The baselines are parallel to the net on both sides, and the sidelines run perpendicular to the net.

The kitchen (non-volley) lines run between the parallel and perpendicular lines to the net, whereas the centerline divides the area between the kitchen lines and the baselines. In combination, the non-volley lines, baselines, and the sidelines on each side of the net bound the service courts and define each players’ area of play.

Check out the aforementioned image under court dimensions to see how these lines appear on the court.

Thank you for sticking with my guide to the end. Pickleball is indeed a great sport to cherish. It’s easy, and novices will have no trouble understanding it. Watch this short video on YouTube to get started.

With the game gaining so much popularity, you’d be missing out if you never played it. Playable outdoors and indoors, the game is a great opportunity to have fun with friends or to get more competitive in tournaments. It doesn’t require much equipment, and it is easy to master even if you’ve never played any of the allied games such as badminton, tennis, and ping-pong.