Ever wonder what racquetball was or how the sport was designed?

Have you ever had an interest to play and wondered what you might need? Do you know all this and want a racquetball court in your backyard? Look no further, this is the article you seek.

Racquetball can be a light and entertaining game or it can be a serious, cutthroat sport. It all depends on who you are and who you play with. People in this sport range from the casual player to the serious, hardcore tournament player.

Racquetball is played with a small, hollow ball, a racquet, and three walls. You can play with two to four players. You can play singles or teams as well.

Normally, this sport is played completely indoors. Even though there is the occasional outdoor play area, they come few and far between.

The game of racquetball was originally called “paddle racquet” by the originator of the sport, and the name stuck until 1969. This change occurred when a man named Robert Kendler founded the International Racquetball Association due to the sport growing so large.

Joe and the creation of racquetball

Racquetball does not have a very long history compared to most other sports, as it is a combination of three different pre-existing sports: tennis, handball, and squash.

The rules are all based on the rules of these three predecessor sports. A man named Joseph G. Sobek is credited with the invention of racquetball in the 1940s. He had come up with the idea of putting string on paddle racquets, and because of all of this, he is known as the “Father of Racquetball.” After coming up with prototypes for the racquet, he still needed to come up with a ball. After several different iterations, he at last came up with a little, seamless rubber ball, known as the “Joe Sobek” ball.

There is a large variation of racquetball rules, as there are rules for regular play and many special kinds of play—ranging from outdoor and team rules to rules for the deaf and visually impaired.

Racquetball has a separate set of rules for many different circumstances, which enables almost everyone to play.

The general rules of racquetball are quite simple to explain and follow. Basically, the objective to the game is to keep the ball in play when it is your turn to hit and try to get the other person to falter and miss their return, like volleyball or tennis. Points are only scored when a person serves a ball that the other player fails to return or when someone loses a rally, which is when a ball is hit back and forth between players multiple times.

A rally is lost when a player is unable to return the ball before it bounces off the ground twice or when a return strikes the ground before hitting the front wall. To win the game, the first side must win two games, which are played to 15 points. If each side wins one game, a tiebreaker game is played to 11 points. This is, of course, as long as different rules for winning aren’t set in advance.

Some advanced layers like to play longer games or more rounds; whereas beginners may only be interested in playing one or two rounds.

I want my own racquetball court

If you want your own court, then it’s important to know how such courts are typically made.

The average, or standard, racquetball court is 20 feet wide, 40 feet long, and 20 feet high. Racquetball courts typically have six playing surfaces. These surfaces are the front wall, back wall, two side walls, ceiling, and floor.

The court is then divided into sections by lines; the short line breaks the court into front and back courts, and the service line runs parallel to the short line five feet in front of it.

The area between the short line and the service line is the serving area and is broken into what are called service boxes. These boxes are where a person’s partner stands when playing doubles and serving. See the diagram below for a visual layout. 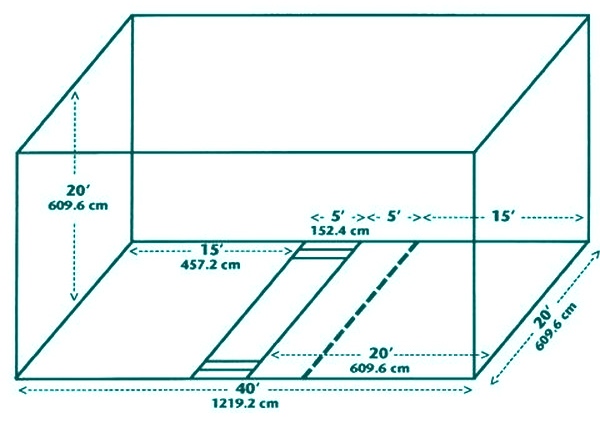 What do I need to play this game?

Racquets, balls, eyewear, and a court are the only hard requirements for play. However, other equipment is available to improve your play. More serious players will want to get goggles, gloves, and special racquetball shoes.

Gloves are optional; however, they give a player better grip and control over their racquet.

Goggles, or eyewear, is a must due to the safety hazard posed by their absence. The last thing anyone wants is a ball bouncing back and busting an eye socket.

Though racquetball has a small span of equipment, one of the most important aspects of the game is the racquet. You need a good racquet with quality strings and a good stringing pattern. You also need to make sure that your racquet is maintained properly.

A broken string, almost broken string, or broken racquet can cause a lot of issue with your game—as well as injury—if not handled. An improperly strung racquet can also be an issue for your game. Even though racquets normally come pre-strung, a person should know how to restring their own racquet or know enough about the stringing to make sure that it has been done correctly.

As noted, a racquet’s string pattern is very important, and the way your racquet is strung has different effects on your game. An open string pattern allows for more ball imbedding and friction where a closed string pattern allows for more surface contact and friction. Stiffer string beds cause more ball squashing, surface area contact, and grabbing, while softer string beds give a longer sitting time for friction to work. In addition to the way the strings are strung, the type of string also makes a huge difference.

Racquets can be strung with thin gauge or rough strings. Thin gauge strings are better for grabbing and have better imbedding. Rough strings—which are also called textured, shaped, or sticky strings—are normally used to increase friction. Recently, strings have been made to flex and move. This is so your ball will have extra spin. Always be aware of your string pattern and string type. If one setup isn’t really working for you, then change it up.

Oh no, I broke my favorite racquet!

You can repair a racquet if its frame is not cracked. You can replace the handle, the holder, the strings, the grips—literally everything except the frame.

Websites are available to repair tennis racquets, badminton racquets, and squash racquets, but not racquetball racquets. And these sites are iffy at best, with information and pricing to repair the same racquet more than one time.

Luckily, there are alternatives. If you do not know how to perform racquet repairs on your own, there are plenty of sporting goods and racquet stores that will do it for you.

In order to avoid constantly repairing a racquet, you need to buy one that suits your style of play, has decent reviews, and you are going to like. Make sure you do your research; if you find a racquet that seems like it may fit you, but has terrible reviews and is known to break, do not buy it. A good place to start checking if you are looking for information online are places that have reviews of the best racquets of 2019.

If you do not choose the right racquet, or other racquetball equipment, you may end up injuring yourself while playing.

Contact injuries, sprains and tears, overuse injuries, and rotator cuff injuries are among the most common injuries while playing racquetball.

Do as much research as you possibly can before you dive in and start playing or purchasing equipment.