Few sports are quite as thrilling as Ping Pong, or ping pong as it is better known.

This sport brings the excitement and speed of a tennis match to a smaller space.

It is a game that entails quick reflexes, powerful shots, and the right amount of control.

But to truly appreciate and enjoy this game, you have to look at the rules of ping pong and how you can play this entertaining game.

In this article, Racquets world will cover all the rules regarding Ping Pong. Check the infographic below for the topic list that will cover today. 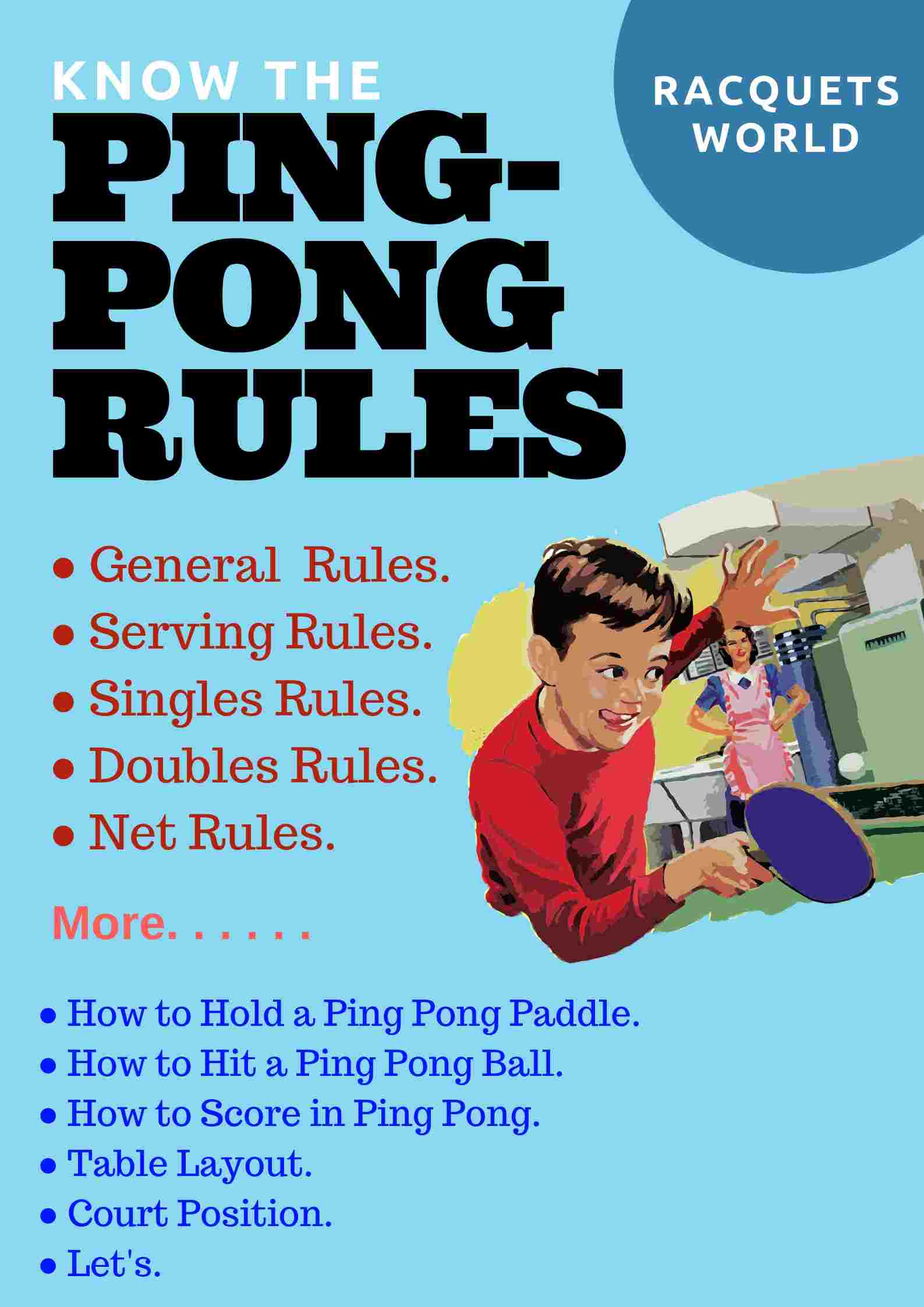 The objective of ping pong is identical to traditional tennis. The goal is to play a ball that has been served back at the opponent with the goal of that opponent being unable to reach the return.

The game works with a few steps:

1. A service will take place. This will entail one person on a side starting the game action, or the rally.

2. The other person will have to return the ball. The ball will then go back and forth between the two sides during the rally.

3. To succeed, you will have to hit the ball to the other side and have it bounce once on the opponent’s side. The opponent must not be able to clear the ball and move it to your side of the net.

The following steps are to be used in the serving process:

1. Keep the ball flat in the palm of the hand opposite of the one you are holding your paddle with.

2. Toss the ball in the air. The ball must be tossed up at least six inches in the air.

3. Strike the ball to where it will bounce off of your side of the net.

4. The ball must clear your side and the net and get on the opponent’s side.

5. Your opponent must then return the serve after the first bounce on that person’s side of the net.

6. At this point, the rally will begin. You and your opponent will continue to hit the ball back and forth with each hit touching the ends.

A singles match will entail two people hitting the ball back and forth. The server initiates the rally with the receiver having to return the ball. The two sides will continue to alternately return the ball until one person is unable to play the ball.

This includes cases where a person either cannot hit the ball after it bounces once on one’s side or if that person hits the ball and it does not get on the table.

● A coin toss will determine who will start the service at the beginning of a match. The person who wins the coin toss will get to choose if that person wants to serve or if the action will be deferred to the opponent.

● A server will hold this position for five points at a time. The two sides will alternate between one another.

● The person who served first during the first game in a match will be the receiver to start the second match.

A let may be called in certain situations. A let is a declaration that the ball is to be replayed from the start of the serve. No points are given due to a let.

The following are instances where a let may be called:

● A serve is delivered when the receiver is not ready for it.

● A person is accidentally prevented from being able to make a proper serve or return.

● A served ball touches the net or its supports while going over it. Any case where the serve is unable to be played properly counts.

A team will serve the ball for ten points before switching over. This ensures that the two people will serve at least five times between the other team has the opportunity to serve.

How to Score in Ping Pong:

A point will be given to a player when that person makes the last successful return during a rally. A point may particularly be given in these instances:

● The opponent is unable to complete a good serve and a let was not called.

● The opponent cannot make a good return. This may entail either the ball not leaving one’s side of the table after bouncing on it once or the returned ball going off of the table without touching the other player’s side.

● The opponent’s racquet or anything else touches the net, adjusts the playing surface, or has one’s free hand touching the field of play during the point.

A ping pong competition will entail three games in one match. You must win two games in that match to win the event.

The person who wins the coin toss has the right to choose which half of the court one will serve off of at the start. The players will switch for the second game and again for the third. They will switch once again during the third game when one player has reached the 10 point mark.

The net is designed to be a dividing point between the two halves of the court. As mentioned earlier, the net must be 15.25 cm high with a 15.25 cm overhang included on each half.

The player must hit the ball to where it clears over the net. The ball cannot touch the net at any point. Also, no one should physically touch the net.

The ping pong table must be organized with a few physical features in mind:

The table must also feature a series of white lines on its body. There should be a dividing line in the middle part of the net. Meanwhile, each side of the net will be divided further by a white line.

How to Hold a Ping Pong Paddle:

You must hold your ping pong paddle correctly to improve upon your gameplay skills. You must use the following points:

The best way to describe the correct handling process is to compare the process of holding the paddle with a handshake grip.

How to Hit a Ping Pong Ball:

The final point to cover entails ensuring you know how to hit the ping pong ball appropriately. You will have to toss the ball up at least six inches off of the surface of the table.

The ball must be hit by the face of the paddle. Spin may be added onto the ball is desired.

You must only hit the ball after it touches your side of the table once. Volleying, the practice of hitting the ball before it can bounce, is illegal.

You can only hit the ball once when it gets on your site. It is legal for the ball to hit your hand and bat at once, although this works best when the impact appears to be unintentional in form.

Be aware of how you are planning your next big ping pong match. Before you make a plan for big game make sure you know the ping pong tips and strategies. Look at how the game is organized and how you can play the game to your liking. This is to provide you with an enjoyable experience with one of the most exciting games around.